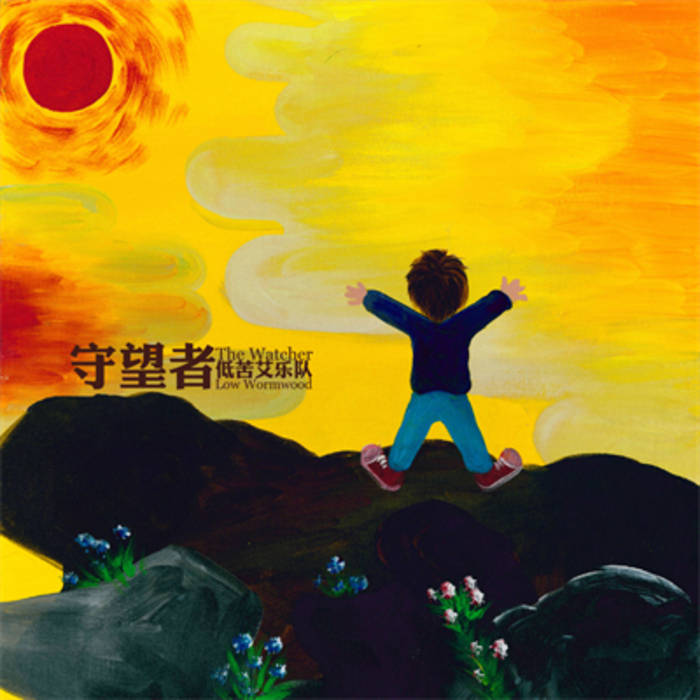 After Low Wormwood’s “Lanzhou, Lanzhou” (2011), which became a Chinese folk classic, the band from Gansu is now set to release a new piece of work. ”Watcher” ’s concept is perhaps a stronger one, more down to Earth, but remains in line with their usual caring, sensitive ways, in which warm and cold sounds as well as happy and sad subject matters come together as one.

For example, the song “Maradonia Soccer” mixes the ideas of football with music and allows this concept fly freely. Other songs, such as “Little Flower”, which is followed by “Little Grass”, lead to a third, central track, "Little Tree”, in a gradual melodic development, which captures the attention of the listener.

The cover of this album is a painting by the 12-year-old son of hawker Xia Junfeng. The boy named the painting “Sun, please come out”. Him and his mother Zhang Jing could be called “watchers”: For two years they had been waiting for the sun to break through in their poverty stricken lives. Low Wormwood don’t want to politicize this story, rather, they invite the listeners to understand the lives of this normal family and share the experience of being a “watcher”; hoping, expecting and looking forward to a more peaceful and calm life.

Abbas’ poems from “Walking with the Wind” can express the anxiety of our reality, the confusion of the future, the interest for strangers, the concern for contradictory things; questions which perhaps no one can answer but which are nonetheless constantly asked, even though no satisfactory explanation can be found. “This is why we have made ‘The Watcher’ ”, Low Wormwood explain. ”It’s an album, in which music speaks for itself. It’s an attempt to use music to transmit our attitude and views on the subject of life, on the current situation of the world. This album could be defined as an attempt at recording what is happening, real emotions and the relationships between love and sorrow as well as love and football”.

After one year of preparation and eight months of recording, “The Watcher” will be presented in October. Just like fostering a tree, hard work has made it into the work of art it is, clearly distinguishing it from previous Low Wormwood albums.

“Watcher” is about contentment, happiness, hope, sorrow, love, football, reality and dreams, and listening to it is an experience, which can be likened to watching a movie or traveling through a storm.