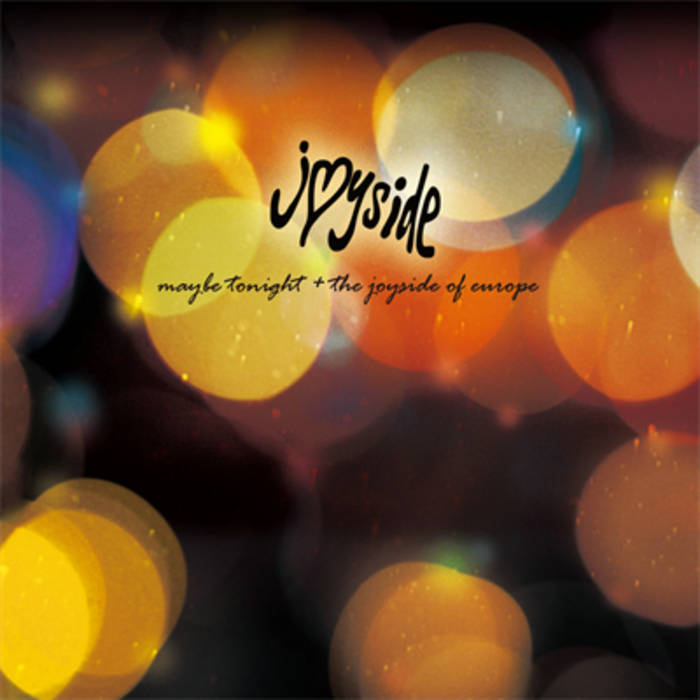 After short term relax, Joyside released their last e.p. Maybe Tonight. The e.p. is double disks and equipped with 6 new songs, the dvd is a documentary of their 2007 europe tour.

Beer, cigarette, hormone, pogo, restless, out of control, sorry...These words have appeared more and more often in the dictionary of cult youths. The “Gang of Gin ” expands day by day. Vintage guys are everywhere in Gulou street and the girls who come to watch the show keep changing. But Joyside is still cannot be copied and beyond.

Neon, polka dot, gorgeous peony, aurora over the city...The design of the new e.p. has perfectly shown the temperament of the now Joyside : romantic, psychedelic, enchanting, beautiful with sorrow. Joyside has desperate praises for the nice things in this new e.p.. But sometimes, dream is for disillusionment.

From Booze at Neptune’s Dawn, had pulled back the perverse violent style. Instead, they start to use the romantic melody to express the fantasy and sorrow after drunk. Their nothingness is no way derives from 70’s New York or Jim Morrison, but from their attitude deep inside. Life is short, to rebel or to enjoy? They has never be angery with the society, or the unfairness of reality. They only express the lost love, meaningless world and parties after drunk. For them, the biggest meaning is to sing those meaningless songs. More than half of the e.p.’s songs are written for girls. They are only a symblo to , standing for the beautiful transient stupid and fantasy thing. Beautiful but heart broken.

Joyside has really changed. Their music is no longer the weapon for resistance but the media to convey emotions. As a result, the melody is more fluent and the composing is more fruitful.

If we say the short opening Sister lunatic has still got some naughty style as punk, Silly Girl is amazingly sweet and sincere, full of charming temperament and sympathy. Soothing melodies and narrative instruments make this song deserve to listen to. The childish wayward telling has made people feel worried. Same effect has appeared in The Last Song For The Endless Party, the sudden weird laughing taunts the world and himself mercilessly. The simple handbell is also unforgettable in the 2 songs, sweet but fragile, just like those cheap but luxurious clothes. They are vulgar rubbish for others but dazzling clothes for Bian Yuan.

Bian Yuan is named by fans “ the only remaining indescribable prince of the 21st century”. Indescribable here is meaningful. Like Your City Is A Desert to Me, the little prince has also seen desert when he first stepped on to the earth. And purity is also born in the nothingness. Bian Yuan keeps saying that the life is meaningless. Human is meaningless. No light, no hope, cold, hard.....these are his usual expressions. But on the other hand, maybe these mean he has shy and anxious desire for the warmth, light and love! The philosophy of Joyside is contradictory and repeating. They express love by chaos and break, or express despair by sweet and romantic. Just as The Last Song For The Endless Party will make you to over reconsider what a scene it could be? The last ong for the endless party, the last kiss for the endless love. This lyric can be discussed repeatedly between “last” and “endless”. It can be replayed endlessly in the circus music. But life is short. We don’t know whether to live happily or to die sadly.