If I'm in Love with You 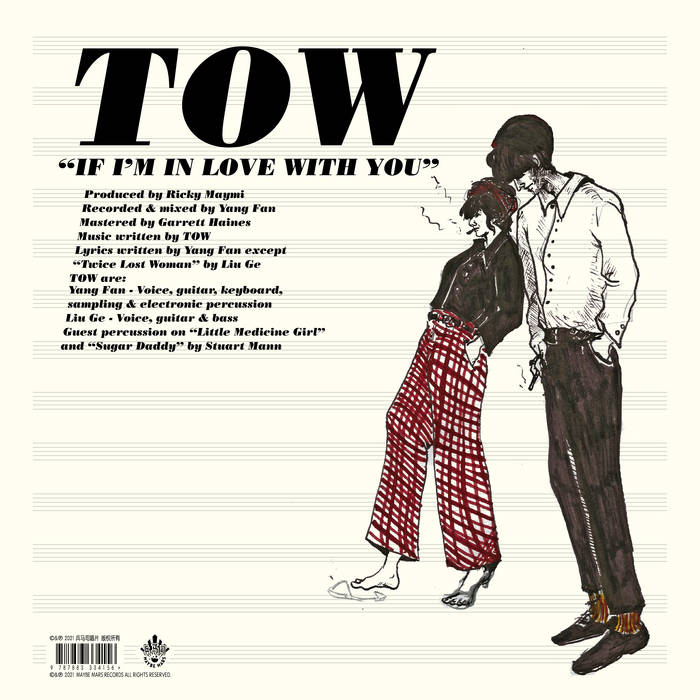 countmeout Listening in the depth of the night, lying on the couch, totally awake but could easily be hallucinating in the space of each song. Favorite track: Behind the Sun.

If I’m In Love With You for the first time collects TOW’s compositions in a stab at putting this mercurial and intoxicating dual energy on record. It’s a semi-narrative fairy tale probing dark, del-icate depths. You can hear traces of each artist's former bands throughout the album — Ourself Beside Me in the intricate guitar melody and low-key bossa-nova beat kicking off the title track, The Molds in closer “Twice Lost Woman,” a spoken-word dirge with lyrics written by Liu Ge and delivered in his unmistakable baritone.

But Yang & Liu lock together in a unique way as TOW, a special mix cohering on sonically dense, thudding tracks like the synth-led, poetically opaque mid-album cut “Behind the Sun.” If I’m In Love With You seems to tell a story, but details are hard to decipher. Lyrics can be haunt-ingly dark, as on “Sugar Daddy”; reflectively venomous, as on “Shitty Hand”; deceptively escapist, as on “Little Medicine Girl.” Dream-state psychology permeates the album, giving it a sticky mys-ticism, an unflinching inward gaze. “Into my dream with your yellow wings,” Yang Fan sings on the mournful and plaintive “Until the Day,” a gripping meditation on rejection. If I’m In Love With You is, ultimately, a conditional statement, a floating point of reference that engrosses with its mature vision, exquisitely articulated sonic textures, and evocative lyrical imagery.

TOW is the duo of Yang Fan and Liu Ge, two pioneers of Beijing underground music. Yang initial-ly carved a space for herself in Beijing’s late ‘90s punk scene as a teenager. As she matured as a musician, she led her own group, Ourself Beside Me, releasing a seminal document of the mid-’00s Beijing rock scene in their self-titled 2009 album. Ourself Beside Me often shared the stage with Liu’s psych-tinged rockabilly group, The Molds, who released one EP in their initial run, 2008’s ironically titled A Cowboy Never Saw A Horse.

In the years since, both artists have remained important fixtures in Beijing’s creative scene. Yang has been active as both a musician and producer, pursuing her own singular vision while sharing expertise with a younger generation of experimental rockers like Chui Wan. Liu has been a steady presence at underground record shop and gig spot fRUITYSPACE, re-forming The Molds and releasing the band’s first official studio album in 2018 via the affiliated Spacefruity Records label.

fRUITYSPACE also published an art book of Yang Fan’s drawing, and has served as an im-portant breeding ground for TOW. Melding a shared interest in spartan, haunting, sometimes deeply dark, always pervasively psychedelic electro-rock, TOW is a meeting of two of Beijing’s most consistently interesting and idiosyncratic creative figures, two living legends of the scene.

TOW formed in 2016, and grew sporadically over the next few years, making occasional live ap-pearances at underground spaces and art events. They describe their own music as “something you can't put into words,” expressed via “a variety of instruments.”