For the Betterment of Well People 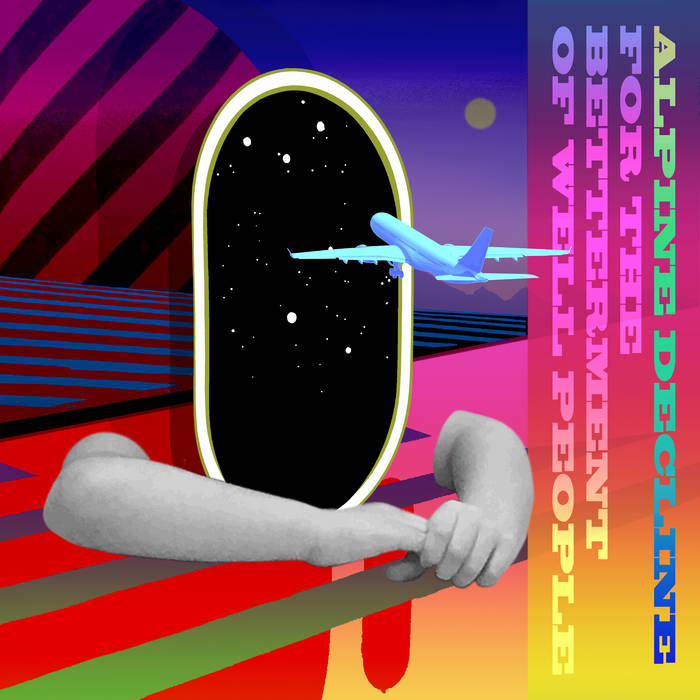 “God we’re such desperate fools, treating our words like jewels, and we fight unto the burning gates of hell.”

Alpine Decline speaks from the other side of the deep on their starkly gorgeous new album, For the Betterment of Well People, their tenth in a decade. Carefully loaded with concise, penetrating alt-pop tunes, it’s an airy glide across choppy waters, a hard-earned lesson glimpsed dimly from the bottom of a very deep well.

Fans of the band will note their continual creep toward sweetening the sometimes bitter pill of their ever crypto-autobiographical dispatches. For the Betterment of Well People’s lavish instrumentation honeys the ear immediately — Wurlitzer, organ, 12-string guitar, singing bowl, and an extended percussion section combine to smooth out some of the rougher edges that have crawled and crackled over previous slabs of Alpine Decline wax. But it’s groovy in only dubious ways — an approximation of earthy warmth piped in to a cold steel spacecraft charting an unknown course toward oblivion. It’s warped like vinyl roasting in the trunk, waves like a lone surfer slanting against the churn, dimly perceived through an ungodly heat shimmer baking off the blacktop. The band’s core exists here primarily as a fucked up, non-human force deforming the otherwise warm, sunny LA vibe they carefully constructed.

For the Betterment of Well People isn’t a Covid album, but Alpine Decline has championed a bunker-to-summit approach throughout their career and personal lives. Their new one is literal memoir, an accounting of the personal and creative travails they’ve pushed themselves through over a decade of climbing over the eponymous mountains and walking into the desolate unknown, blindfolding themselves and dropping two tabs of acid, forcibly, painfully prying open the door to more perception, reporting back. It’s always been about creating big interior stratospheres for the bunker class. The lighting’s better, the air is sweeter, but we're still deep underground.

The production of For the Betterment of Well People neatly reflects this phantasmagoric duality. Longtime band collaborator Yang Haisong trekked from gray Beijing to blue-skied Van Nuys. There he matched up with LA scene stalwart Matthew “Linny” Linesch — known for his work with Edward Sharpe and the Magnetic Zeros, among others — to co-produce. The caricature-like strangeness of this brooding, poetic figurehead of the Beijing post-punk scene drinking in the solar overload of LA translates to tape, which was laid down with an almost urgent efficiency: tracking for a six-piece band, vocals, overdubs, and mixing was knocked out in a vaporous, occasionally lysergic 11-day marathon.

The end result is a collection of tracks that feel more like a still frame from a movie, or a memory traced from the last seconds of a quickly escaping dream, than a work of poetry or literature. It’s a diaristic panoply of images and feelings cascading toward a mix of hope and unease, superficially pleasant pop songs that are ultimately about the remote loneliness and remorse of having gone out too far and finding you may not be able to get back. It’s both an illness and a remedy, a holistic cure for uncertain futures decocted from the crushed dust of mountains already climbed.

“I hope people catch the message that it is through adopting a process of ritually altering your life - through any door - that you can better yourself and break beyond a reality that, frankly, is crushing all of us right now.” — Alpine Decline