Any Monkey Is Dangerous 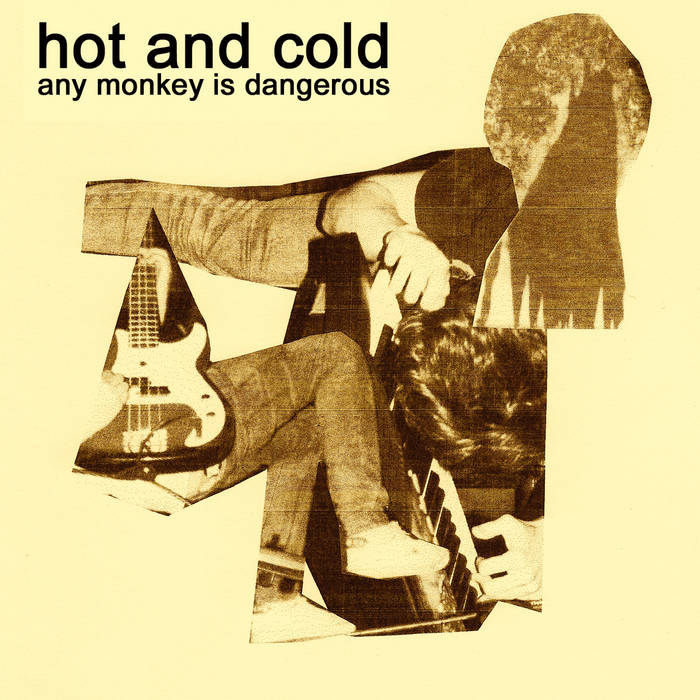 Even in Beijing – quite likely the single most exciting city for new music today – Hot & Cold have proudly stuck out. Rather than gradually descending into chaos, their notoriously frenetic performances explode from the get-go. Hot & Cold spend as much time in the crowd as they do onstage. Simon’s mid-song climb from the ground floor of iconic Beijing hotspot D-22 to its second level is the stuff of local legend, but the Frank brothers are just as happy to take their cymbal-bashing into packed audiences, or attack each other with neon inflatable dolphins.

But these are far from simple antics. Hot & Cold’s greatest asset is perhaps their inexhaustible energy. That doesn’t simply mean they know how to put on a good show. It means that when they practice, Joshua frequently breaks bass strings; when they finish, it’s time to shower and change clothes. And lie down.

Their debut, Any Monkey is Dangerous – Maybe Noise’s second release – captures the band’s shambolic grooves with all the vitality of their live performances. Hot & Cold channel their penchant for obliterating noise through a deep love for the fuzzy anthems of Pavement and Pixies. Their angular riffs and keyboard jabs have drawn comparison to New York no wave and Cabaret Voltaire, while lo-fi drums loops, rollicking basslines, and irreverent vocals evoke the Fall in both sound and attitude. Crystalline melodies emerge from their pulsing sonic chaos, and touches of yesteryear Bollywood hits pierce through the melee.

There’s no denying that Hot & Cold has a soft spot for abrasiveness; mainstream acclaim in Beijing was never really in the cards. But the band does have a dedicated audience, composed predominantly of the local musicians making waves in China and abroad. Hot & Cold have had an indelible mark on Beijing groups, whose performances were more often characterized by timid shoegazing than euphoric bodyshaking.

Sure, they’re Canadians in China. But John Cale is from Wales, and Damo Suzuki sure ain’t German. Hot & Cold have established themselves as an integral part of Beijing’s scene. Simon founded organ-driven noise rock trio Speak Chinese or Die with the guitarist of Sonic Youth favourites Carsick Cars, and is a performing member of psychedelic punks Ourself Beside Me. Both Frank brothers are also frequent collaborators with WHITE, the astounding Beijing duo whose Maybe Noise debut was produced by Einsturzende Neubauten’s Blixa Bargeld.

For all the talk of walls of feedback, though, it would be a disservice to pigeonhole Hot & Cold as tinnitus in a jewel case. These kids’ enthusiasm and pop sensibility will bring you onto your feet, and then, in one euphoric wave, knock you off them.